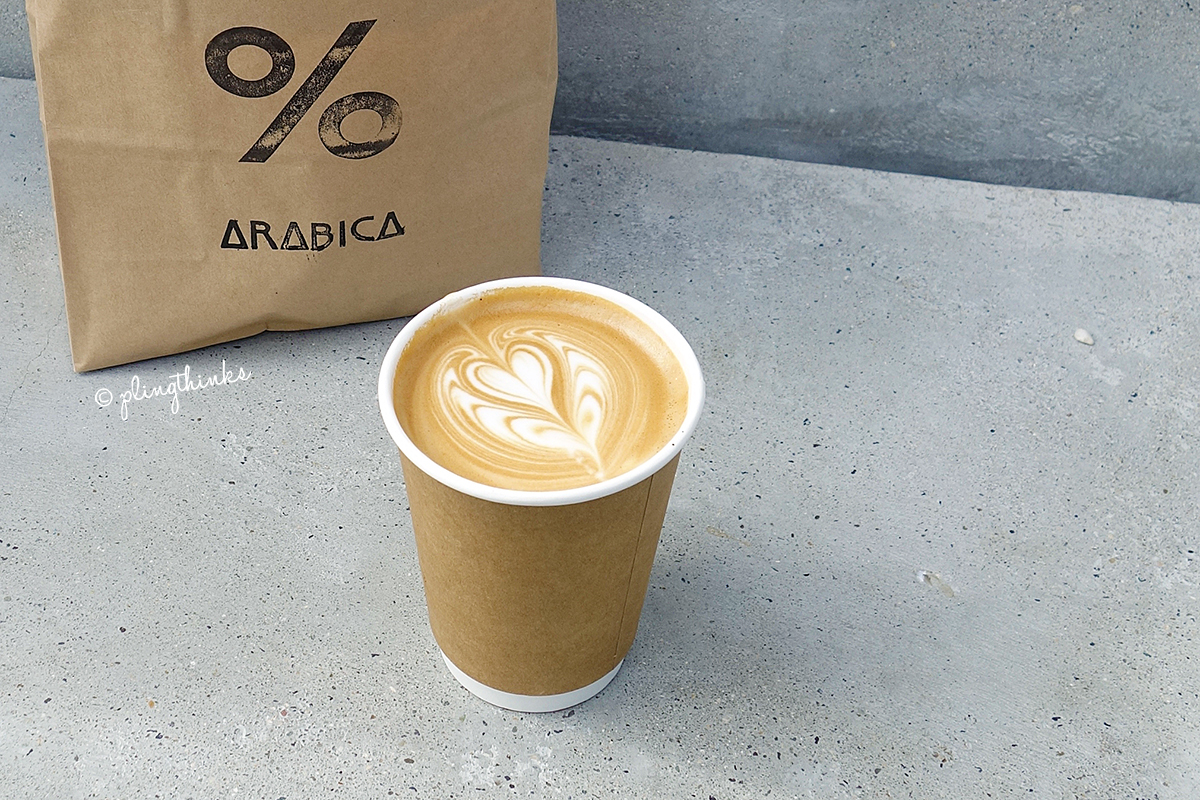 %Arabica hardly needs any introduction for coffee-lovers who can be seen in long queues winding out of their cafés located around Kyoto and around the world — Hong Kong, China, Philippines, France, Germany, Morocco, Oman, UAE, Kuwait, Bahrain, and yes, Singapore. We first visited % Arabica in the autumn of 2015 when the café in western Arashiyama opened its doors 4 months back.

Though the brand first started in Shoji-san’s home base in Hong Kong where he distributed the Slayer espresso machines and exported the Japan-made Tornado King roasters — both of which were used in its cafés — it was in Kyoto where the brand really took flight. Its sleek, minimal aesthetics rivalled that of Blue Bottle Coffee which we would review in our next post.

Making coffee in front of the Arashiyama mountain, the Ooi River, the Katsura River & the Togetsukyo.

In fact, we overheard the title of this post from one of the Arashiyama rickshaw driver or shafu (しゃふ or 車夫) when he was introducing the famous coffee joint to a couple. He actually commented while pulling the rickshaw past the Arashiyama café, “This café sells the most coffee in Kyoto.”. We didn’t know if that was true, but that was what we heard.

Contrary to what we were used to in Singapore’s café scene, % Arabica was not a sit-down kind of café. The cafés were small (more like a coffee stand) and the coffee was usually takeout. There was one long bench for seating at the counter in the Higashiyama branch while the Arashiyama branch saw a L-shaped stone bench outside. The long benches didn’t seat many so most of the patrons were seen clutching onto their takeout coffee and milling outside the cafés.

Well, at least that was the scene in 2019. Back in 2015, we could grab a seat outside their café and enjoy a cuppa while admiring the rolling hills of Arashiyama (嵐山) and the tranquil Katsura River (桂川). We nursed our java in peace for about an hour, basically zoning out and freeing our minds.

Now, their fame no longer allowed this luxury. When we went back in April 2019, the queue was so long that we had to forego the much-needed coffee and head to our next destination. Be prepared to queue for about 30 minutes to an hour during peak spring and peak autumn seasons.

Is it worth it to queue? That’s a difficult question to answer and there seems to be no right answer. And the only answer, it seems, is “It depends.” It depends on whether you think that it will be worth your time to queue, and whether the coffee will be of the same high quality in spite of its long queues and thus, making it under the pressure of time and many caffeine-starved eyes.

They were also more known for their espresso coffees than their pourovers so that was what we opted for instead of our usual pourovers. Be good, my lactose-intolerant stomach! Let us have that latte, please.

pling thinks…the % Arabica Espresso Blend latte that we had in 2015 was good. The milk foam was fragrant, thick, and creamy and it accentuated the roasty, aromatic espresso beneath with its slight acidity and notes of chocolate and caramel. We totally enjoyed our cups of coffee that day and bought back 2 bags of coffee beans for ourselves and another coffee addict back home.

Having missed our cups of % Arabica coffee in Kyoto last spring, we are hoping to visit their Singapore’s branches when they open in Holland Village and Arab Street this year. We are also crossing our fingers that they will still taste as yummy as the ones we had then.

How to get to % Arabica Arashiyama

Alternatively, you can rent a bicycle when you get off the JR at the Saga-Arashiyama Station and cycle over. Map links above.