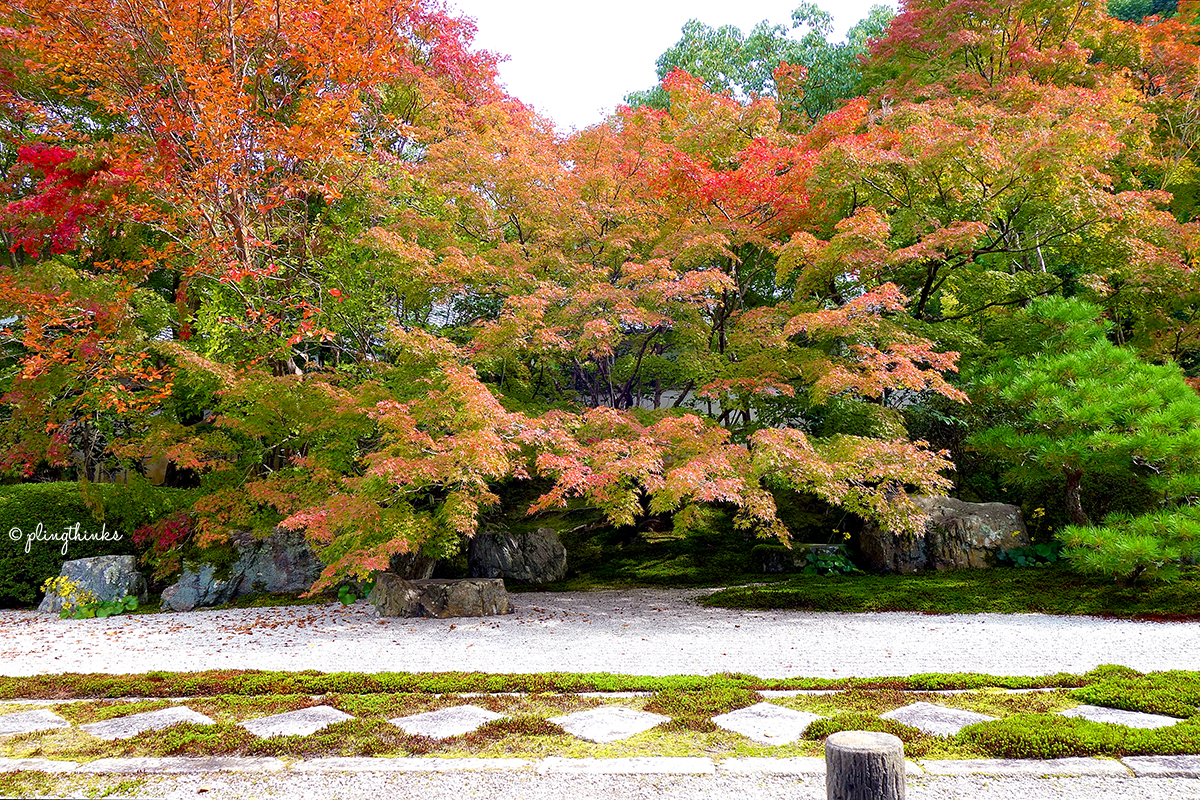 Nanzen-ji (南禅寺) is a large Kyoto Zen temple located at the base of the undulating Higashiyama mountains and near the Philosopher’s Path. Originally a retirement villa for the Emperor Kameyama, it was later converted into a temple and restored numerous times after a war, a demonstration, and a fire.

Not delving too much into its history, we explored some parts of Nanzenji Temple during one early autumn when the Japanese maple trees had not reached their peak autumn colors of rich reds. Yet, they managed to soothe our senses, standing among gardens of rock, ponds, and an ancient Roman-style aqueduct.

After our coffee at Blue Bottle Kyoto, we set off to this landmark temple made of one main temple, many sub-temples, gardens, and structures.

Here’s our list of 7 things to do at Nanzenji Temple, a National Historic Site.

1. Enjoy the scenic walk into its sprawling grounds

Backed by the beautiful mountains of Higashiyama and flanked by Japanese pine and maple trees, the walk into the 800m by 500m grounds of Nanzenji was healing for us: leisurely strolling under the trees, mountains expanding before our eyes, birds and insects singing their autumn songs, pine cones hanging overhead, maple leaves just beginning to don their autumn coats and peeking over traditional stone walls.

2. Escape into the quiet beauty of Tenjuan Garden

A sub-temple located at the right side of the entrance and missed by many who were eager to head to the aqueduct, Tenjuan Garden (天授庵) holds a therapeutic beauty that seems to heal and calm our souls. We enjoyed this garden the most and spent more time here than we should, almost forgetting that this was only our first stop within Nanzenji.

Tenjuan Garden is split into 2 gardens: a landscape rock garden and a pond garden (jump to point 3). Both exhibit vastly different appeal. The former sees raked pebbles evoking watery waves, low-hanging maple leaves, and moss-invaded stone paths. Seated on the steps of the building, we lost ourselves in contemplation as much as we admire the glorious hues of fall foliage existing harmoniously with the stark whites, sombre greys, and mossy greens before our eyes.

We peeked in on a beautiful room overlooking the garden. It was out of bounds but held so much promise of a great view while having a warm cup of matcha, no? In Tenjuan Garden, only the gardens are open to the public. The building and its chambers are not open to visitors. We could only admire it from outside. Entry fee to Tenjuan Garden is a mere ¥500.

3. Relax to the ASMR of the pond garden in Tenjuan Garden

Hidden at the back, big stone slabs led to the humble entrance of the pond garden. As opposed to the dry rock garden above, this garden encircles a pond lush with trees. At the beginning of autumn, the color graduation was beautiful as the leaves started to morph, their colors reflecting off the pond.

It was a perfect autumn day: the fresh smell of woody pines, the murmur of water, the cool air on our faces, the sun reflecting off a still pond of young lotus leaves, the rustle of leaves overhead whenever a breeze blew through.

Somehow, this image of the lotus pond reminded me of Claude Monet’s Nymphéas bleus which I have had the blessing of seeing with my own eyes in my favorite Paris museum, Musee d’Orsay.

Here, we had a sense of being enveloped in a secret garden ⁠— strolling under the thick canopies of trees; striding across wooden planks across the pond; jumping across stone slabs in the shallow part of the pond; listening to the natural sounds of flowing water; eyeing the koi swimming idly and sending ripples across the pond as they surfaced in hope of being fed; being mesmerized by the trickle of water led by branches into a natural stone bowl. Ahhh…this IS healing!

The last, in fact, was a landscaping marvel to us. A bonsai pine tree, coaxed into its winding form and supported by beams, led the water track to the natural stone basin. We stood in front of this, minutes ticking away, enthralled by the ingenuity and beauty of its form, the hypnotic trickle of water, the soft ripples, and the ASMR of the water fountain.

Sanmon (三門) literally means 3 gates and that was how Japan’s biggest temple gate got its name. We didn’t use the word “doors” but instead the word “gates” because Sanmon has no doors, just entrances. Built in 1628, Sanmon Gate’s colossal structure extends over the treetops just beyond, offering a perspective view of the long path leading deeper into the temple grounds.

Sanmon Gate is built from wood of which some are of impressive sizes. One can witness the passage of time on these wood, already darkened with age, wood grain exuding such warmth and texture. We were smoothing our hands over these dark wood pillars, so beautiful are their natural wood grains!

5. Stand in awe of the Roman-style aqueduct, Suirokaku

This Roman-style Aqueduct called Suirokaku (水路閣) — built during the Meiji Period in 1890 and regarded as a civil engineering marvel — transported water from Lake Biwa into Kyoto as part of the Biwako-Sosui Canal for the purpose of spinning cotton by the energy of water wheels, irrigating water, and keeping water for fire prevention. The beautiful red brick structure, faded and blackened by time and water age, passes through Nanzenji and is such a rarity that it became a popular photo spot.

In fact, it was where everyone was rushing off to get that Instagram shot or selfie under the ancient brick arches and missing the beautiful Tenjuan Gardens. And true enough, we couldn’t get a clean shot without another fellow visitor popping into the frame or walking under the arches. We also observed that the arches are taller on one end and shorter on the other, something that was easily missed when seen as a whole.

We have seen aqueducts before in our travel to Rome but they were mainly built with large stones or concrete and comparatively, seldom with these much smaller sized red bricks. It was our first red brick aqueduct!

Don’t leave just yet after the quintessential shot under the arches. Walk up these stairs to get a different view of the aqueduct. We felt that it looked amazing amongst the green leaves. Every time we see an aqueduct, we wish that we could see the top of it and how it connects to the conduit to transport water.

For those who are into hiking or cycling, or have time for longer exploration, you can walk on the path alongside the aqueduct and follow the flow of water into the forest for a few hundred metres.

6. Saunter through Hojo Garden of Nanzenji and calm your mind

Designated as a National Place of Scenic Beauty, Hōjō Garden (Hōjō Teien 方丈庭苑) winds around Hōjō (方丈) which was the abbot’s former living quarters and Nanzenji’s main hall. Visitors can amble along the raised wooden floors after taking off their shoes at the entrance to take in the view of this famous rock garden, said to mimic tigers and cubs crossing through water.

This beautifully simple garden — also called Leaping Tiger Garden — exhibits a long stretch of space covered by only pebbles, sand, and gravel raked to simulate waves and ripples. At the corner of green, we saw pools of moss and formations of rocks of which one is said to resemble that leaping tiger. Can you tell which one?

Hōjō Garden boosts of calm, elegant beauty. We cleared our mind, strolling slowly through and sitting down to admire the dry landscape garden, unperturbed by the shuffling of feet and the soft creak of the wooden floor. During the peak autumn season when the maple leaves turn fully red, it must be gloriously beautiful here!

What we didn’t get to see is the sliding paper door painting of 2 tigers drinking water, designated as a National Treasure.

7. Have tea at the Hojo’s tea room

Right at the entrance of the Hojo, a small tea room looking out to a miniature waterfall easily captured our attention. The light was so beautiful and the strip of red carpet on the tatami floor just added to the whole aesthetics. For an additional ¥500, you can sit in this room, sipping a bowl of Japanese matcha green tea and savoring a traditional Japanese sweet or wagashi (和菓子).

Alternatively, you can choose to head to Choshoin (聴松院), one of Nanzenji’s sub-temples, for a vegetarian lunch. Also known as shojin ryori (精進料理), it features simple dishes harmoniously put together, following Choshoin’s tradition for over 300 years. We heard that it would be better to arrive before noon to get a seat overlooking the garden or out on the deck overlooking the pond.

There weren’t any pictures of the food or matcha as we didn’t get to try both, having arrived too late. However, we do recommend these to our readers if you can plan to arrive early.

pling thinks…Nanzenji is one of those must-visit Zen temples where there is much to explore. Being one of the five great Zen temples, alongside Tofuku-ji, Tenryu-ji, Kennin-ji, and Kodai-ji, Nanzen-ji is steeped in history and culture while offering stunning autumn colors, calming Zen rock gardens, and even a rarefied thing of an aqueduct.

How to get to Nanzenji Temple

If you are planning to visit Nanzenji Temple after Blue Bottle Coffee Kyoto, you can see the temple entrance from its doorstep.