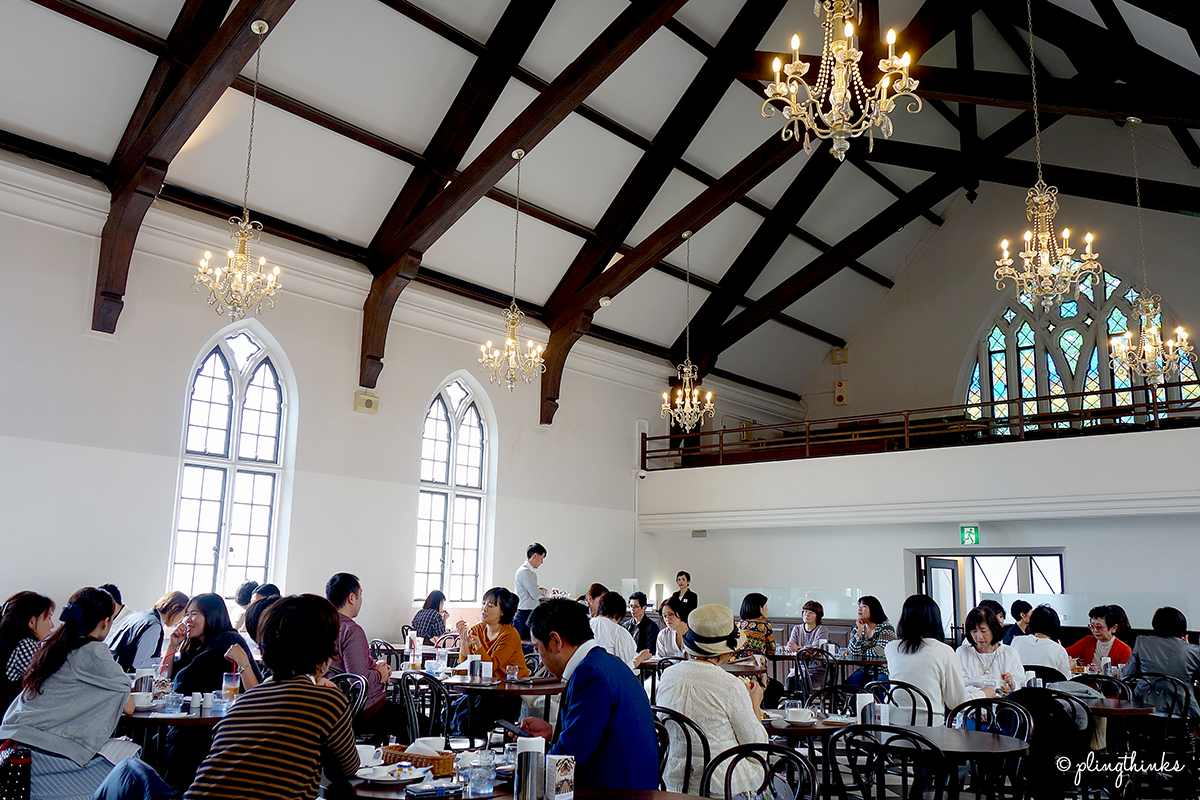 Housed within the former Kobe Union Church built in 1929, Freundlieb (フロインドリーブ) is a bakery and café located in the Ikuta area in Kobe, near the Kitano neighbourhood where many foreign merchants and diplomats resided after Kobe opened its doors to foreign trade in 1870.

The Gothic-style church was designed by American architect, W.M. Vories and survived the Great Hanshin Earthquake in 1995 with some damages. On the other hand, Freundlieb had suffered immense damage to the store and factory in the same area, Nakayamatei (中山手).

Freundlieb itself dated back to 1924 when its German founder and 1st-generation master baker, Heinrich Freundlieb came to  Japan as a prisoner of war during the First World War and eventually settling down with a Japanese wife and opening his own bakery which he handed down to his son, Heinrich Freundlieb II. It was the 3rd-generation master baker, Bella Freundlieb, who moved the then-damaged store and factory to the former church in 1997 after it was being restored to its neo-Gothic style and remade into a bakery, a store, and a café. The building is registered as a Tangible Cultural Asset in 1999. It also received an Award for Urban Design of Kobe in 2000.

On the 2nd floor, Café Freundlieb boosts a charming aesthetic and a bright, airy atmosphere with its vaulted ceilings and tall arched windows. The dark wood panelling accentuates the high ceiling, further enhancing the elegance of the space. The light streaming in from the beautiful windows and the soft amber glow from the branched chandeliers make for a relaxed ambience while one is having a meal.

The stained glass window could be seen at what would have been the narthex where the choir burst into songs of praise and worship. On the opposite end, the crossing seats a couple of tables in a cosy embrace while the altar and the sacristy have been converted into the kitchen and serving area. From the entrance of the café to the kitchen is a long nave — where the pews must have been — seating 4 sections of tables.

We had breakfast there and ordered the morning set (¥1,036) of egg sandwich, ham n’ cheese sandwich, a side of fresh salad (dressing on the side), and a pot of tea. The bread was soft and fluffy. We could tell that it was freshly baked, having helped a client open a bakery cafe in Singapore and ate mountains of bread. And eggs! We can never leave out egg sandwiches in Japan — the Japanese just do the egg mayonnaise filling so well that they never fail to satisfy. These were the same, plus the delicious bread! Morning sets are available from 10am to 11.30am and lunch sets are available from 11.30am to 2pm. Set menu is available from Mondays to Fridays.

One can really while away time here which was exactly what we did reading a book and planning our next destination. Many Japanese ladies were seen catching up and even greeting neighbours in the next table. When the clock neared 12noon, Café Freundlieb started to fill up with lunchtime goers and business crowd. When we left, a queue can be seen in the waiting area just outside the entrance of the café. There was even a waiting room if this area overflows.

There are numerous spots of history in this building. At the stairwell, we spotted an antique public phone which was plugged in so you could actually use it! The toilet exudes an old-world elegance which made us want to refer to it as the powder room.

Renowned among the locals, the spacious Bakery is located on the first floor. There are bakes, biscuits, chocolates, confectionery, and honey that make for good souvenirs for foodie friends back home. Its most famous bake is no doubt the iconic pig’s ear pastries (see top right) which the bakery is accorded as the one introducing this Western pastry to Japan.

pling thinks…Freundlieb is a must-visit for brunch lovers and for cafe-goers who love fresh bread and spending a charming time in a historical building with friends or families. It reminds us of CHIJMES in Singapore whereby the chapel is also converted into an event space instead of letting the beauty of the old church architecture go to waste and demolished especially when it had undergone damage due to war or natural disaster. We are praying for the restoration of Notre Dame in Paris as well. 🙏

How to get to Cafe Freundlieb

Take JR West, Kobe Municipal Subway, Hankyu Railway or the Hanshin Electric Railway to Sannomiya Station and walk about 10-15 minutes toward Kitano neighbourhood. Use the map links above to navigate your way.

Take the JR West to Shin-Kobe Station and walk 10-15 minutes. You can pass ANA Crowne Plaza Kobe or the Nunobiki Herb Garden. Use the map links above to navigate your way.