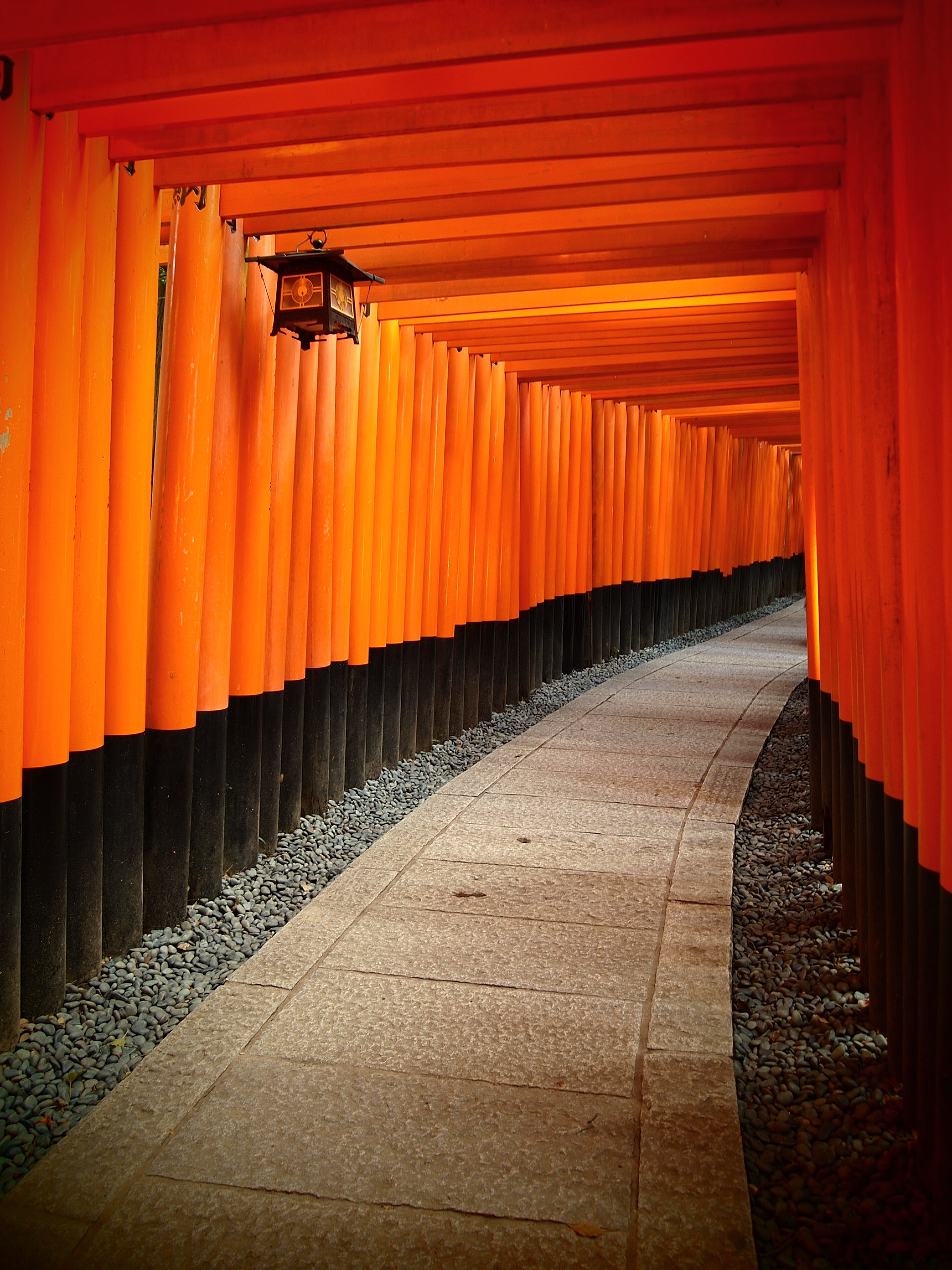 If you have been a fan of Japanese animation films, you’ll be familiar with images of foxes often appearing as mystical messengers. But that’s the not reason why Fushimi Inari Shrine (伏見稲荷大社 Fushimi Inari Taisha) attracted me and many visitors from afar.

Located just 2 stations away from Kyoto Station at the JR Inari Station, this shrine housed the famed and flaming red torii gates (鳥居) in the thousands all the way up the Inari mountain (稲荷山), promising a sight not to be missed. That’s how this sight got its name – Senbon Torii (千本鳥居), literally meaning thousands of torii gates.

But, before we get to that…

On a beautiful autumn day, we arrive at the entrance of Fushimi Inari Shrine, where young Japnese maple trees lined the avenue against clear blue skies and the Inari Mountain in the background.

There are 2 torii gates at the entrance, with the one located at the end of this avenue being the larger one. It was a good day – lots of sunshine, a cool temperature, and with the sky taking on a glowing blue, we were already snapping away along this stone avenue.

What’s different about this shrine are the many fox statues – each with a different face, and some bearing a key in their mouths, said to be for the granary. These foxes (狐 kitsune) are regarded by the Japanese people as messengers of Inari, the shinto god of rice.

The highlight of visiting Fushimi Inari is undoubtedly the tightly packed rows of flaming red torii gates, donated by individuals and corporations to the shrine. The donors’ name and the date of the donation were inscribed on the back of these magnificent red gates.

After the initial stretch of tall torii gates, we came to 2 parallel rows of torii gates – placed much closer, and with its height much lower  than their predecessors (about the height of a man). I would recommend taking the one on the right, which is slightly lower and longer than the one on the left.

As we walked through them, light from the setting sun streamed through the gaps between each torii gates and accentuated the eerie beauty of Senbon Torii. Somehow, the red seemed redder with the lush greenery surrounding these gates on the trek up the mountain. And I kept peering out between the gaps to look at the forest, half-expecting a fox to be hidden among the foliage.

After exiting from this stretch, you will reach a smaller shrine and see a map illustrating how the torii gates lead all the way up to the mountain. The trek would take 2 hours, and we decided to forego the climb for lunch and exploration around this area. We were at the spot with red wordings.

I liked the fox emas (狐絵馬) and how the Japanese people creatively added varied expressions to these wooden prayer boards.

Needing to hurry down, as the weather boded more rain that Autumn, we trekked back down and said our goodbyes to Fushimi Inari Taisha.

How to get to Senbon Torii in Fushimi Inari Shrine