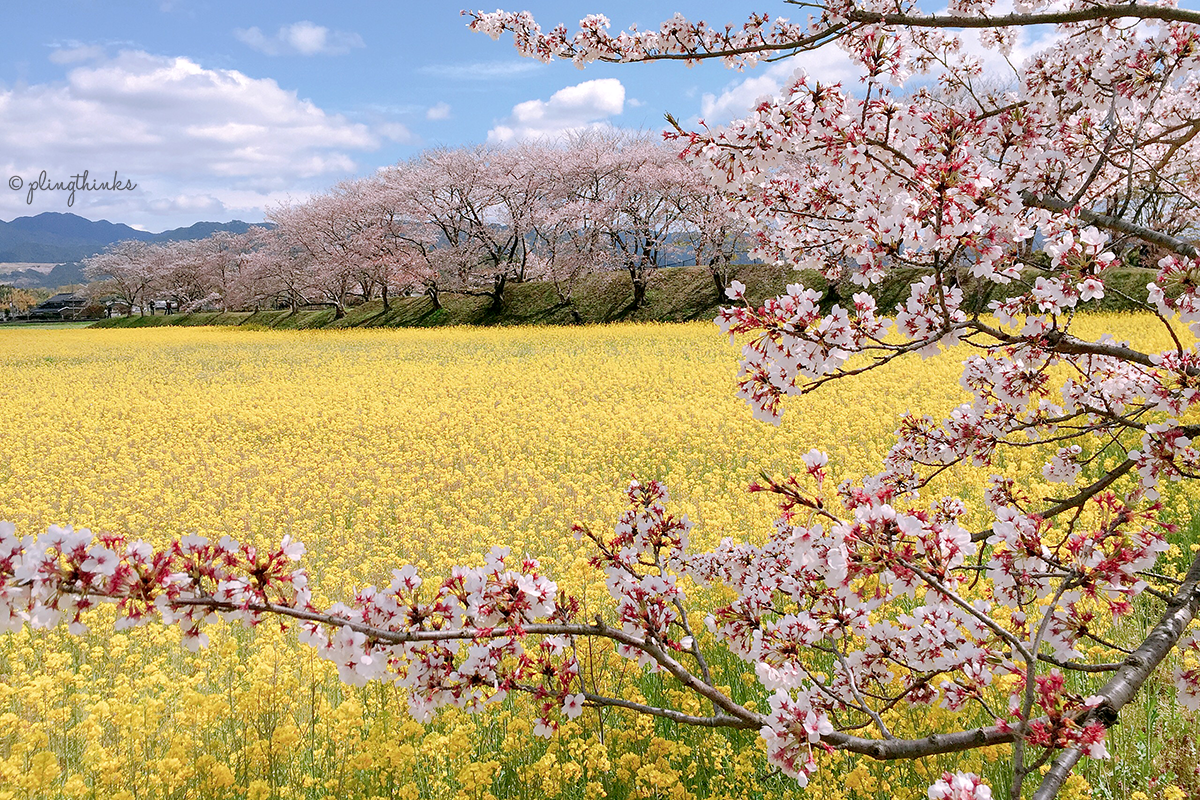 Spring beckons more than just the much-loved cherry blossoms in Japan. It is also a time when we can admire other seasonal flowers — one of which blooms in abundance in the ancient city of Nara (奈良) against a backdrop of mountains and yes, cherry trees.

At Fujiwara Palace Ruins (Fujiwara Kyūseki 藤原宮跡), this combination of rapeseed flowers, cherry blossoms, and mountains in the background lured us off the beaten path to Kashihara (橿原市), a city in Nara Prefecture and away from the main Nara city’s attractions. It took us 3 transfers from Kobe (2 if you’re traveling from Osaka) before we could step into this flower paradise.

The “Palace” in Fujiwara Palace Ruins is long gone. All that remains are ongoing evacuation works and red mock pillars to mark where the Imperial Audience Hall once was.

Nara, like Kyoto, used to be a capital city and Fujiwara city was picked to be the capital by Emperor Tenmu (631-636) where he planned and built the first-ever tile-roofed imperial palace. However, a fire in 711 burnt down the whole city and nothing remains of that piece of history except the immutable mountains and whatever archaeologists can unearth. If you’re interested to know more about ancient Fujiwara, hop over to the Fujiwara Capital Information Centre, located at the stop where one takes the Community Bus.

Having gotten that out of the way, let’s bring you to the main attraction!

Most locals who visit Fujiwara Palace Ruins come for the lyrical display of seasonal flowers. In spring, 2 wide fields of rapeseed flowers swayed and bowed in the intermittent breeze against a backdrop of cherry blossoms. In summer, pink lotuses and orange cosmos took their turns to switch on their charm. And finally, in autumn, pink cosmos bow their blowsy heads in goodbyes before snow descends. We made a mental note to return in autumn — still our favorite season.

At the entrance, it already looked promising in terms of wow-ing us — by that time, we were cherry-blossomed-out from a week of non-stop cherry blossoms viewing (hanami お花見) in western Japan. The bar was raised much higher after all that chasing after cherry blossoms and definitely, after Himeji Castle.

Enter through a small gate and walk along a roughly hewn path lined with cherry trees on the right. We can already see the yellow rapeseed flower field in the distance. Excited, we hurried on.

These cherry trees lining the 2 peripheries of the rapeseed flower fields lent a delicate shade of pink to the lemony yellows of these flowers. We saw some painters welding their paintbrushes and capturing the scenery with their choice of medium. And indeed, this scenery might be the sort of landscape that Claude Monet and Mikhail Larionov would have painted?

Besides painters and photographers, we saw families, friends, old-time pals, and pups basking and lounging in the springtime sun, either seated at the benches dotted along one side of the field or strolling with hands behind backs. Without doubt, mats would have been unfurled and laid down if the ground weren’t still a tad wet from yesterday’s rain. Nonetheless, exclamations of the stunning beauty could be heard all around.

Turning the other way, the view is just as breathtaking — lemon rapeseed fields set against the panorama of the Three Sacred Mountains of Yamato: Unebiyama (畝傍山), Kaguyama (香具山), and Miminashiyama (耳成山). As the clouds moved over and from the sun, we saw varied shades of yellow as the light shifted.

It was soothing to walk under the canopy of cherry trees — which were on a slightly higher elevation — with the rapeseed flower field just softly rustling on the other side.

Whenever the wind picked up, the rapeseed flower fields undulated and rippled as the flowers swayed with the push and pull of the breeze blowing through. Sometimes, the flowers quivered and danced. A whisper of swishing got us lost in reverie. Added to this, a fluttering of cherry blossom petals as they detached from their receptacles and rode on the wind.

Notices are placed around the boundaries of the flower fields. So, we urge travelers to respect nature and do not tread onto the flower fields. Even if you’re selfie-obsessed, don’t. Even if you’re aiming for that perfect ‘gram, don’t. Just don’t. We can’t imagine this beauty being annihilated by trampling feet just because one needs to gain more likes or followers. Just be shutter-happy within the boundaries of respect for nature and for people. Thank you! We shall stop being naggy here. It’s just that we witnessed too many such occurrences during our travels as could be seen even in the next photo.

We went shutter-crazy and snapped a total of 442 photos & videos of this flower field in Fujiwara Palace Ruins, knowing full well that our amateurish skills and equipment would not do full justice to this place, always conscious of that nagging weight of failing to capture its full beauty. Seeing the beauty of the real thing trump what we could capture with our cameras.

pling thinks…Fujiwara Palace Ruins is a must-visit for catching cherry blossoms with a different perspective — one that is of a supporting role instead of being the main star which can be seen in most other attractions — and before it gets more known, popular, and crowded. It’s not on the usual tourist route (there were less than 5 foreigners then, including us) but if you appreciate scenery and nature, you will love it!

How to get to Fujiwara Palace Ruins

Admission is free.
Fujiwara Palace Ruins is always open but note the last Community Bus back to the Yamato-Yagi Station is 6.09pm on weekdays and 5.29pm on weekends if you are taking that route.

Not knowing if we would be able to do a 30-minute walk from a station without getting lost in more rural areas, we opt for the train+bus mode (top) instead of the train+walk mode.

Sharing the bus schedule to Fujiwara Palace Ruins here so that you can plan ahead. The information is correct at the time of publishing.

Kashihara City also said that you could use the Kintetsu and alight at Kintetsu Miminashi Station or Kintetsu Unebigoryomae Station and walk 30 minutes.